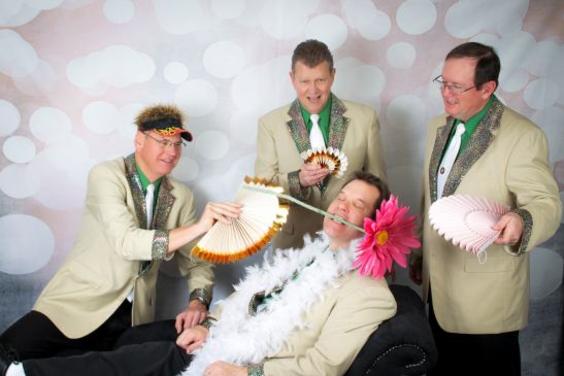 Lance Del Ray – vocals, bass guitar.
Being the third brother was also a challenge.  Getting the hand-me-downs from Beaver and T.J. had its moments.  The clothes and shoes Beaver wore in the first grade fit Lance in the fifth grade.  The other brothers always say that Lance was “Mom’s Favorite”, but just because he got first pick on everything, including which songs he wanted to sing, was no reason to say that nor was there any written proof, strictly hear-say.

T.J. Del Ray – vocals, keyboards.
Being the oldest brother isn’t always easy, unless of course you’re T.J.  He had the rest of us doing his chores and taking the blame for his “mis-adventures”.  T.J. was always the first to do everything, including playing an instrument and performing.  The younger brothers were usually in awe of his talent and how all the girls thought he was dashing.  One of his first “paying” jobs was at a Shakeys pizza in town.  Mom used to make us go watch him every night, playing the piano, the banjo, and singing.  That inspired the rest of us.

Ralph Del Ray – vocals, drums, percussion.
Being the baby and the shortest wasn’t as much fun as most people think, just ask Ralph.  The elder brothers used to get him to do their chores by telling him that “It will make you taller, that’s how Beaver got to be so tall!”  Well, after four or five years, Ralph noticed that nothing was happening, and decided to listen to Buddy Holly and Johnny Cash records instead.​

Beaver Del Ray – vocals, lead guitar.  (Retired)
Being the tallest brother had its advantages.  It was quite a few years before the three of us combined could beat him at basketball.  He was the one that could always “reach” things, especially the high notes, the top of the Christmas tree, and the stuff up in the closet.  Many a nights’ mom made us sit through the basketball games at school and cheer on the “Beeve!”  Beaver is now spending his retirement down in Florida with the Grandkids and the beautiful weather!  If he ever comes back up to visit, we sure hope he will come join us on the stage again!!

Scott Del Ray (Cousin) – vocals, lead guitar.
When we were younger we couldn't wait to pile into the station wagon and drive down to Uncle Bob and Aunt Maude's house in Milwaukee.  She used to make the best chocolate chip cookies ever and our cousin Scott used to hoard a big stash for us in anticipation of our visit! Well that made him our "favorite" cousin, and it even got better when we found out how great of a guitarist and singer he was. So now since our tallest brother has decided to stay in Florida, it was an easy choice and a perfect fit to have Scott take over on the guitar.

***(On a side note, Aunt Maude's older brother is Ed McMahon, hence the slight resemblance!)***

The “DEL RAY’S” are all former members of the “OUTTA STYLE SHOW BAND”.   The “DEL RAY’S” are a four-piece band that has been performing together since the late 1970’s. The “DEL RAY’S” perform a variety of rock & roll from the 50's, 60's, and the 70's.  The “DEL RAY’S” have a knack for getting the crowd involved and keeping them dancing all night long.  The “DEL RAY’S” have performed at numerous public and private parties such as; the Miss Wisconsin Pageant; Sawdust Daze; Concerts in the Park; Local Telethons; Church picnics; Casinos; Wedding receptions; Class reunions; Street dances; Sock hops; Fund raisers; Town picnics; Birthday parties; Dinner shows; Anniversaries; Company picnics; October festivals, Outdoor functions; Christmas parties; Night clubs; Lounges; Bars; and many other activities.  The “DEL RAY’S”  have also performed with national acts such as; Sha-Na-Na; the Crystals; Bobby Vee; Fabian; the Fireballs; Bill Hailey’s Comet’s; Chubby Checker; the Buckingham’s, Loving Spoonful, the Romantics, and others.